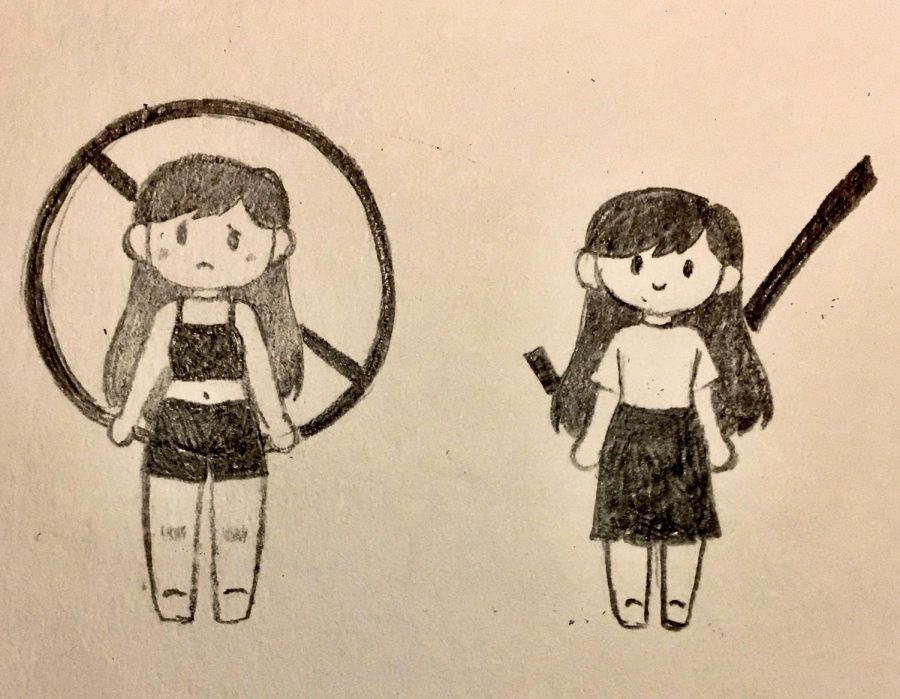 Every school has rules. Some are necessary to create a safe and productive learning environment for all students. A dress code — prohibitions on what a student can wear — is one rule that is not needed in a school setting. Dress code rules target female students more than males, and in some cases, target people based on their body shape. They also hinder students’ ability to express themselves through their clothing and accessories. The dress code, while being fair in some senses, is ultimately unnecessary and is not needed in school.

The dress code creates more problems than it solves. For years now, there have been many allegations of the dress code targeting female students, not only at LHS but at high schools around the country.

“The dress code not only causes girls to feel ashamed of their own bodies, but it also gives them the impression that their bodies are sexual.” said Kaitlin Rasbourn for the Calabasas Courier. Dress codes with extreme rules like no showing shoulders, no shorts above the knee, and no tank tops lower women’s self esteem and makes them feel like their bodies are something that they need to feel ashamed of.

In addition, the dress code can also inadvertently target different body types. If someone has more curves, they will look different in a tank top or tight shirt. Sometimes, these bodies are perceived as sexual, and a simple T-shirt will get them dress coded. “Fervent dress-coding is not only sexist; it also reinforces an already-prevalent body shaming culture, kick-starting the phenomenon at an early age,” stated writer Pooja Patel for the National Eating Disorders Association.

Patel wrote about feeling ashamed of her body and her outfits, which made her ashamed of herself. Freshman Brianna Lamoreaux expressed the same sentiment: “The dress code is targeted at women, and many rules aren’t needed for school.”

Many people use school as a place to express themselves. Some do so in art, some in music, and some express themselves through clothing and accessories. With a controlling dress code, students are not allowed to show clothing, hair styles, or jewelry that express who they are.

Sophomore Juliet Desouza-Wrzesniewski has very strong feelings about dress code rules, which she agrees punishes boys less harshly than girls. “Of course, I understand boundaries,” she said, “but wearing a crop top isn’t the end of the world. It’s hot in school most days, and it’s a way of expressing yourself. If cheerleaders can wear mini skirts at school, I can, and so can everyone else.”

Luckily, LHS does not have too many strict rules on dress codes. It simply states not to wear things that are inappropriate, such as very short skirts or shorts, shirts that expose the midriff, hats and hoodies, or anything that promotes substance abuse, discrimination, violence or inappropriate topics.

In some ways, dress codes are necessary, but most of the time, they are just more ways to control what students do both in and out of school. Hopefully in the future, students do not have to worry about whether they will get dress-coded if their shorts are a half-inch above the allowed length.