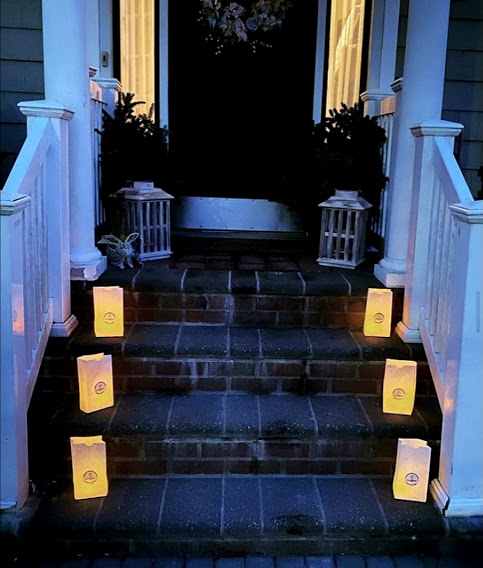 The streets of Lynbrook glowed with pride and candlelight on Thursday, Mar. 11 as residents placed luminary bags on their front porches to join together to show support for the Senior Class of 2021. The bags were sold through the Light the Sky fundraiser, an event organized by the joint forces of all Lynbrook School District student councils from elementary to high school.

The idea for the fundraiser was introduced by sixteen-year Waverly Park student council advisor Shari Bowes, who realized a need to bolster the PTA Council’s Senior Scholarship Fund. The PTA Council typically raises scholarship money through the homecoming football game, which was originally cancelled this year due to the coronavirus pandemic but was recently rescheduled for Apr. 10.

This fundraiser marks the first collaborative effort between all Lynbrook School District student councils. “I noticed that the community was in need of a unifying force,” Bowes said. “We also needed a way to support our seniors. It wouldn’t be fair for them to receive a smaller scholarship fund than previous classes,” she added.

Bowes’ first step was to reach out to LHS Student Government Association (SGA) advisor Mary Kirby, who immediately jumped on board. The two advisors have a deep history in Lynbrook and a strong relationship that dates back to Bowes’ childhood: Kirby was Bowes’ babysitter, and later her English teacher. Bowes later taught Kirby’s children at Waverly Park, and now, they work together within the district.

Once they agreed to pursue the idea, Bowes and Kirby pitched a plan to their student council students and began ordering supplies: plastic candles, paper bags, and personalized stickers. Students from every school’s student council played a part in organizing the event, but Waverly Park, Marion Street, and LHS led the initiative. They helped to garner student and community pre-orders, and they would later pack and distribute luminary bags. Finally, they chose a date for the bag lighting: Mar.11, for its resemblance to two candlesticks.

As students worked to organize Light the Sky, many unlikely friendships formed between high-schoolers and those as young as fifth grade, which Kirby and Bowes agreed was surprising and incredible to behold. “This event just created such a beautiful sense of community, of belonging, and something for everyone to look forward to,” Kirby said.

Additionally, all three schools worked to promote the event through flyers and digital advertisements. Waverly Park Student Council President Riley Shogan starred in a commercial for the event, which was posted on Instagram and Facebook. “It’s so exciting to bring everyone together in a time like this,” Shogan commented.

Senior members of the LHS concert choir also produced a promotional video, which featured the talented bunch singing the 2013 hit song “Burn” by Ellie Goulding. This is the second promotional video the choir made this year, the first being for the SGA’s virtual Human Relations Day event. It was shared via Instagram, on both the SGA’s (@lynbrooksga) and the choir’s (@lynbrookhighschoolchorus) accounts.

Chorus teacher Barry Wyner directed both productions. “I love supporting the SGA because I so deeply believe in the good work they do,” Wyner said. “I also have strong affection for this senior class, which has an uncanny amount of amazing chorus students who have contributed so much to our program; they are truly a group worthy of honoring,” he added.

Customers had the option of purchasing one bag for $5 or three bags for $10. Bags were then distributed in the Kindergarten Center parking lot the week of Mar. 7. According to Kirby, the SGA was overwhelmed by the community’s positive response, with students, teachers, community members, and businesses flocking to order bags. Local eateries, such as Lynbrook Bagels and River Mill, also supported the cause. Superintendent of Schools Dr. Melissa Burak was Light the Sky’s first customer.

“That’s what makes this school district so unbelievable,” Bowes said. “You reach out to one person, and suddenly, everyone is stepping in to help out. It’s this great love for the community that drives it all.” In sum, the schools raised close to $4,000, which will go directly to the PTA Council’s Senior Scholarship Fund and will be awarded to deserving seniors before they graduate.

LHS Student Body Vice President Maeve Mooney declared the event a success. “We raised so much money for the senior class, and it was incredible driving around seeing all the lights,” Mooney said. “As a senior, it means the world to me that the community came together to support us.”

Kirby and Bowes agreed that although many believe the pandemic to be a hindrance to educational opportunities, they see it as a window to expand their horizons. “We were given an opportunity, as educators, to think outside of the box and collaborate in order for our students to hone essential skills, like leadership and resilience,” Kirby said.

This optimistic attitude is evident on the LHS SGA Instagram account, which has been extremely active throughout the school year, despite the cancellation of many school events. The account’s goal is to model appropriate, responsible behavior and create a fun, collaborative environment for students to share school news. “If you look at the SGA Instagram, you really wouldn’t think we’re in a pandemic right now,” Kirby laughed.

The Waverly Park Student Council has also maintained its philanthropic streak this year, running events such as a Thanksgiving food drive, a Super Bowl canned-food collection, and the making of “kindness grams” for the Ronald McDonald House Charities. Over the past several days, neighboring school districts, such as East Rockaway and Franklin Square, have even begun to contact the SGA, praising them for their work and asking how they, too, can organize a Light the Sky event.

The night of Mar. 11 was aglow with hope, and it is not surprising to see why. “We do what we can to bring the community together,” Kirby said, “That’s the Lynbrook way.”