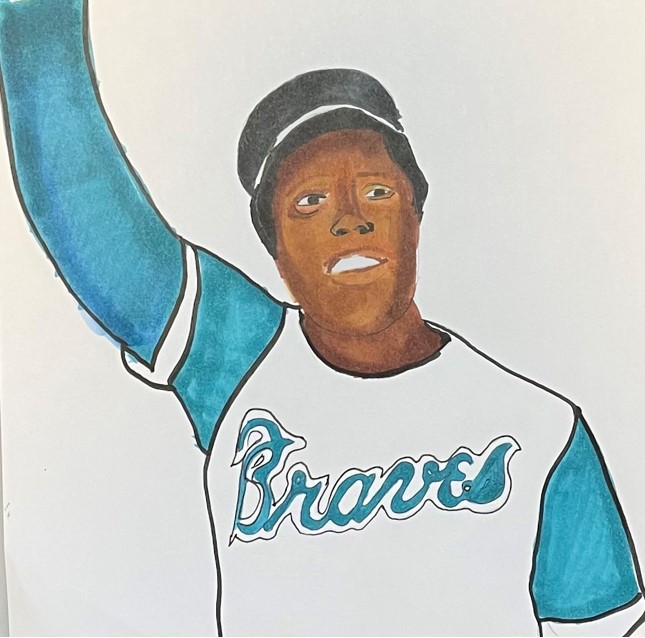 It was a sad day for baseball as Hall of Famer Henry “Hank” Aaron passed away at the age of 86 in Atlanta, Georgia, on Jan. 22. The Major League Baseball (MLB) released a short video tribute on their website (mlb.com) where many members of the organization, as well as former players, paid tribute to Aaron’s remarkable career. MLB Commissioner Robert Manfred expressed his grievances for the players, the fans, and the organization, saying, “It’s just an unbelievable loss for us […] Hank Aaron had a dignity and humility about him that, when combined with his prowess on the field, just made him a truly unique human being.” Aaron was an all-around player, but his colossal record-breaking 755 home runs in 23 seasons was a monumental achievement. His legacy on the field reflected his character off the field, as he strived, struggled, and succeeded to advocate for racial equality in the world of baseball.

Aaron was only 20 years old when he entered the MLB in 1954 with the Milwaukee Braves, and he was the first to wear number 44 for the Milwaukee and Atlanta Braves. Former New York Yankees’ right fielder Reggie Jackson, who also wore the number 44, remarked that Aaron’s talent was clearly visible through his performance: “You could see such an enormous amount of confidence in him when he was at home plate.” First was a place that suited Aaron, who had a tenacious drive and lots of athletic prowess, leading him to set many records that still stand today. His most well-known home run record was set on July 20, 1976, against the California Angels. Before that, he had to surpass Babe Ruth’s standing record of 714 home runs. On Apr. 8, 1974, he hit number 715 off Al Downing of the Los Angeles Dodgers to officially became the new home-run king.

American singer-songwriter Lenny Kravitz recalled on his Twitter account when Aaron broke Ruth’s record: “Watching him […] on television was a monumental moment. As a young black child, he inspired me to push for excellence.” History and economics teacher Eric Finder clearly recalled, “The poise and class that [Aaron] showed when he broke The Babe’s home run record and throughout his career. Unlike today’s players, he did it with style. There was no arrogance in his game like today’s players.” It was not just home runs that Aaron dished out at home plate: he finished his Major League career with almost 1,500 extra-base hits, over 2,000 runs batted in (RBI), and appeared on base over 6,500 times. Aaron is also the only player who is a part of both the 3,000 Hits Club and 500 Home Runs Club: a truly magnificent feat.

After 23 years in the big leagues, Aaron’s legacy was set to live on in Cooperstown, New York, as he was inducted into the Baseball Hall of Fame in 1982. However, the road to fame was not an easy one; Aaron faced constant opposition, discrimination, and death threats because of the color of his skin. Anatomy and physiology teacher and baseball coach Jon Zaccaro explained that Aaron’s resilience was something he admired: “I think what I respect most about Hank Aaron is that he was breaking records that had been around for a long time, while he was dealing with the horrors of racial injustice. I remember reading how he would need police escorts to leave the ballpark, and how he had to protect his children from possible abduction threats because he was African American. Yet, he persevered and dominated during this time.” Bob Kendrick, president of the Negro League Baseball Museum, expressed how difficult it must have been for Aaron to continue his work towards breaking Ruth’s record, but commented that “he handled it with such grace, class, and dignity.” Chipper Jones, former third baseman for the Atlanta Braves, thought similarly, writing on Twitter, “He had every right to be angry or militant… but never was! He spread his grace on everything and everyone he came in contact with.”  Hank Aaron was more than just a baseball player; he was a compassionate, humble, and inspiring human being. His efforts were recognized by former US President George W. Bush, who presented Aaron with the Presidential Medal of Freedom, the highest civilian honor the United States can grant, in 2002.

Countless former and future players who were lucky enough to watch Aaron play, or take the field alongside him, had nothing but positive, uplifting, and inspiring memories and experiences with Aaron. Former New York Yankees legend and outfielder Mickey Mantle once said, “As far as I’m concerned, Hank Aaron is the best ballplayer of my era.” Mike Trout, the center fielder for the Los Angeles Angels, posted a photo of Aaron on Instagram with the caption: “You were and are an inspiration to be a better person on and off the field. We lost a true LEGEND of the game today.” In the words of boxing legend Muhammad Ali, Aaron was “the only man I idolized more than myself.” And, to former US President Barack Obama, “Hank Aaron was one of the best baseball players we’ve ever seen and one of the strongest people I’ve ever met.” To honor Aaron’s memory and keep his legacy alive, math teacher Michael Franklin believes that the MLB should “have all the players wear his number on opening day, either on their jerseys, like they did for Jackie Robinson, or as a patch. They can even wear a patch for the entire season. That would be a very nice way to honor one of the great ball players ever.”

Despite the great fame Aaron accumulated, he remained humble and honest about his way to greatness: “I stand here today because God gave me a healthy body, a sound mind, and talent […] But it was not fame I sought, but rather to be the best baseball player that I could possibly be.” Michael Dieguez, a former minor league player for the Chicago Cubs and physical education teacher says that hearing stories about Aaron from his mentors helped him play as a better athlete: “One of my instructors with the Chicago Cubs knew Hank well. He mentioned more than once how Hank played the game hard and handled racism, and difficult situations, as good as anyone. I like to think I played the game hard, but wish I had half of his mental toughness to deal with the frustrations that baseball can bring. It’s a game built around failure.” With any failure comes an opportunity to start anew and re-establish a drive toward success. Aaron offered a valuable life lesson about life’s opportunities to baseball players and ordinary folk alike: “In playing ball, and in life, a person occasionally gets the opportunity to do something great. When that time comes, only two things matter: Being prepared to seize the moment and having the courage to take your best swing.”