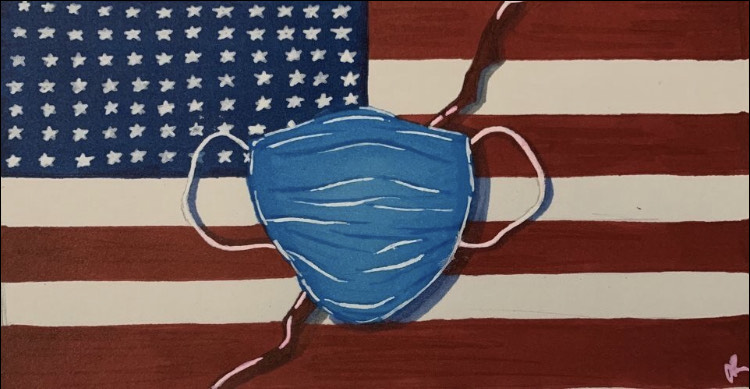 When you think of America, and America’s greatest challenges, the image of the American flag flying high might come to mind. People coming together and doing what they could to support their troops, or everyone uniting after 9/11, that is America. Nowadays, America is faced with a new enemy; it is no longer another country or an organization of terrorists, it is a natural killer. The coronavirus pandemic is sweeping the nation and has left everyone hurting. With over 60,000 deaths and over 22 million people losing their jobs in the United States, many fingers are being pointed at whom is in the wrong. While the government could have been more prepared, we cannot go back in time. The only thing to do is move forward. However, the same country that has come together in the past has started to break apart. Political fragmentation and public placement of blame has been a large part of the response to this virus. With all of the fright in the world and all of the bravery being seen through people on the front lines, the United States and its people must unify. The political leaders are not setting the stage for unity in many respects, further hindering the response to the virus that has started to destroy the country that they govern.

The most publicized disagreement to date between the governors, both Democratic and Republican, and President Donald Trump is in regard to funding for testing. A major reason that it has been extremely difficult to contain the virus the lack of availability of testing. When the virus first came to the US, there was a major lack in testing, and this led people to coin the first six weeks of the virus in the US as the “missing six weeks.” Ron Kain, the man who spearheaded the fight against Ebola in 2014, told a Georgetown University panel that “The US response will be studied for generations as a textbook example of a disastrous, failed effort. What’s happened in Washington has been a fiasco of incredible proportions.”

As the situation has unraveled, more tests have been created, but it has also been hard for states to fund the testing. President Trump has made it clear that he believes the governors “don’t want to use all of the (testing) capacity that we’ve created. We have tremendous capacity. The governors know that. The Democrat governors know that. They’re the ones that are complaining.” This quotation reflects his belief that the Democrats are trying to politicize the virus and use it against him. Whether that is true or not, President Trump’s claim that the government has provided enough testing has been rebuked by many state governors. Maryland governor, Republican Larry Hogan responded with “…to try and push this off to say that the governors have plenty of testing and they should just get to work on testing — somehow we aren’t doing our job — is just absolutely false.” Many Democratic governors have similar opinions to Hogan’s and have not refrained from stating their concerns. Notably, Andrew Cuomo, governor of New York, which is a hotspot of the virus, recently revealed, “[States] need two things from the federal government. We need help on that supply chain, especially when it becomes international, and we need coordination and basic partnership. When you fund the state government, you just are funding a state government to perform the functions you want us to perform which is the reopening function. If you want us to reopen, we need funding.” This battle over testing is just one of the problems between the country’s leaders.

Another reason that this conflict has continued to rage is because Democratic governors have the majority of control over the response to the virus. The response to the virus has been put in the hands mainly of the state governments. While President Trump has made crucial decisions, a lot of choices have been made by the states.  Many of the hot spots are in metropolitan areas, which Democratic governors mostly control. These governors include the governors from Wisconsin, Michigan, Pennsylvania, and North Carolina, along with New York and California. Thus far, the most confirmed cases have been in New York, and Democrat Cuomo has continued to voice his opinions, which differ from those of President Trump. The two met at the White House on Tuesday, Apr. 21, and Cuomo revealed that the meeting was “productive,” and despite their numerous differing in opinions, they had agreed that state funding was and is still very necessary.

Recently, as some governors have begun to lift restrictions for nonessential and essential businesses, President Trump supported them via Twitter. Although many states and healthcare professionals believe that it is still necessary for nonessential businesses to stay closed and large gatherings to remain suspended, some governors believe the opposite, including governors from Georgia, Iowa, and North Dakota. In other states, as some governors started putting strict restrictions in place, people have begun to protest these new laws. Two of these protests took place in Minnesota and Michigan. As these protests occurred, President Trump tweeted “LIBERATE MICHIGAN” and “LIBERATE MINNESOTA.” These aggressive tweets have sparked much controversy, and the governors are fighting back. Following these protests and tweets, Michigan Governor Gretchen Whitmer’s deputy press secretary said: “We are all on the same team when it comes to defeating COVID-19. Right now, the Governor is focused on saving lives and protecting Michigan families. As the Governor has said, we are not going to reopen Michigan’s economy via tweet.” This conflict is one of the many that has occurred between the governors and President Trump during this coronavirus outbreak.

Another event has been on the President’s mind during this crisis: the upcoming 2020 Presidential election. His adversary is Democratic candidate Joe Biden, who has been endorsed by many notable Democrats including Bernie Sanders and former President Barack Obama. In an attempt to get an upper hand in the election, President Trump has begun to link Biden to China, where the coronavirus outbreak began. Anti-Biden advertisements show Biden making comments about China and a potential travel ban, which have been deemed weak by many. When asked about the many negative ads being put out about Biden and the lack of positive ads for President Trump, his campaign official explained that “Positive ads add nothing to him. It’s not going to get us more votes.” President Trump has gotten a great deal of negative feedback for his handling of the coronavirus and continues to place much of the blame on the Democrats. On Monday, Apr. 20, he tweeted: “The Fake News Media and their partner, the Democrat Party, is doing everything within its semi-considerable power (it used to be greater!) to inflame the Coronavirus situation, far beyond what the facts would warrant.” As the election nears, there is no doubt that the coronavirus will become more politicized.

As people watch the news and read articles following the virus, the conflicts have become evident. When asked about the issue, sophomore Lexi Capitali shared, “I have definitely noticed tension. Living in New York, I have mainly seen this tension between Governor Cuomo and President Trump. I still appreciate both of their efforts as they try to get on the same page and work through this to the best of their ability.” She also explained how she believes this tension could affect response to the virus: “I think political tension hinders the country’s response. Political figures fighting is the last thing [the country] needs right now. We are all scared, and the possibility that political figures would not be able to come to an agreement makes everyone more stressed and scared.” World History Teacher Mr. David Rabinowitz additionally commented on the issue: “I have watched the Gov. Cuomo briefings, and they do not appear to be overtly political. However, I am sure that without watching either too intently, they both carry political intentions, desires and tensions…. Political tensions are important for debate and conversations to occur amongst our citizens. However, stubborn politicians use these tensions (and other issues) to hinder our nation’s progress regardless of the issue.” This insight exposes the actions often taken by political leaders that is being shown in these trying times.

As of now, there is no cure to the virus. However, the country has begun to come together, even when the politicians cannot. Virtual learning, virtual concerts, and NFL Drafts have given the country entertainment and reasons to all come together. Additionally, essential businesses and people on the front lines have risked their lives and proven that heroes come in all different forms. The response to the virus has helped people to feel a sense of togetherness, even in the wake of political tension. In order to stop the spread, America must be on the same page, and that all begins with our leaders. Without unity, there will be no solution.