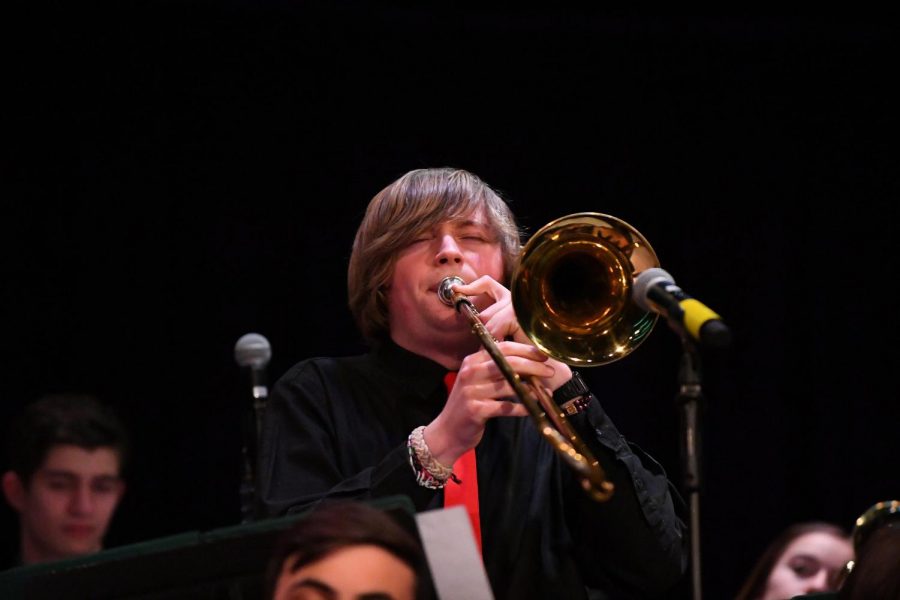 The show opened with the Chamber Orchestra, under the direction of Orchestra Teacher Alyssa White. The opening number was the rhythmic “Libertango,” which featured an accordion solo by sophomore Emily Bergin and immediately had the crowd swaying along with the music. “Downtown Funk,” featured Jack Viceconte on drum set and brought great energy to the already “popping” string orchestra. The orchestra was followed by the Jazz Band, which took up a sizable and equally energetic portion of the evening. Under the direction of Brian White, the members of Jazz Band shone as a whole but also as individuals, showcasing improvised solos. Finally, the show ended with a performance by the Show Choir, directed by Chorus teacher Barry Weiner and choreographed by Elise Candreva, a Lynbrook senior. The Show Choir performed various numbers, including a dance solo, and songs ranging from old classics to iconic pop.

Since the show featured such diverse performances, it was easy for audience members and performers alike to find a number that resonated with him/her. Sarah Forster, an audience member, shared, “My favorite part, and I have to be honest here, was the Jazz as well as the Pop.” she said with a smile. Then continued, “All jokes aside, my favorite part was when the Show Choir performed, “Status Quo” from the movie High School Musical.” She continued, “I also loved the saxophone solo by Nick Christian.”

Senior Danny Neri, who participated in all three parts of the concert shared, “My favorite part of the show was my performance with the jazz combo. We always arrange and choreograph our own version of the tune.” He continued, “During the show, we just dance around on stage and have fun while we play.” Ryan Denker, a senior who was an audience member that night shared his appreciation for the jazz band, stating, “ I really enjoyed the Jazz combo. I just really liked how every single person got a chance to flaunt their talents.” When asked what made the concert truly special, Show Choir member Anna Fucci, a junior, shared, “The show itself was the best part of the whole experience because we finally got to make people happy and show everyone how hard we’d been working.”

Overall, it was a wonderful evening enjoyed by friends, family, staff and the performers themselves. The show, which was about 2 and a half hours long, kept the audience swaying to the music the entire time. The immense talent of the performers shone through, and the fun, diverse set of performances left each audience member with a new favorite song as a souvenir from the night.